Introduction to the QBO

The quasi-biennial oscillation (QBO) is the dominant source of variability in the equatorial stratosphere, characterized by alternating easterly and westerly winds with a period of around 28 months (Baldwin et al. 2001). Based on the classical theory, the QBO is generated by momentum deposition by vertically propagating equatorial planetary and gravity waves and partly by laterally propagating extratropical Rossby waves. 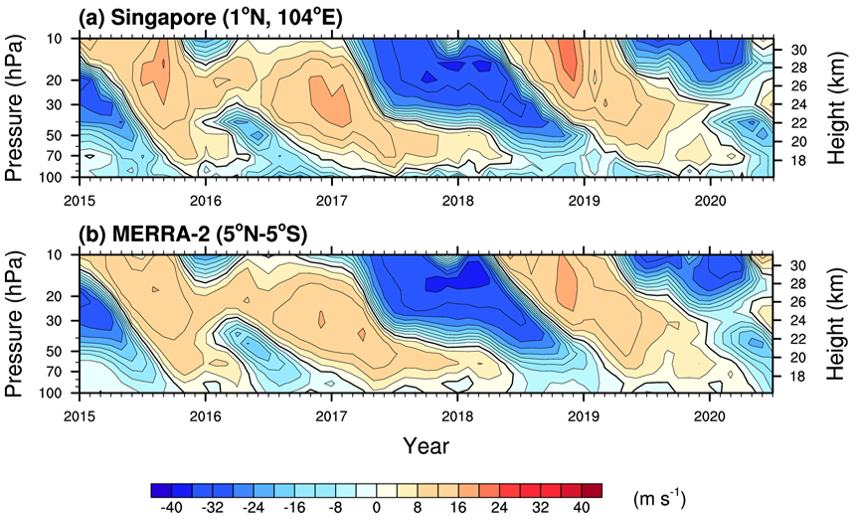 The QBO can be divided into an easterly phase (i.e., the QBOE) and a westerly phase (i.e., the QBOW) under easterly and westerly stratospheric winds, respectively. Due to the different signs of the zonal wind shear, each phase has a different anomalous meridional circulation to satisfy the thermal wind relationship in the tropical β-plane (Plumb and Bell 1982). There is an upward motion near the tropical tropopause and a downward motion in the subtropical tropopause during the QBOE, while the opposite is true for the QBOW.

The below figure shows the composite results of the deseasonalized five metrics in the QBOE and QBOW. Positive values of the convective available potential energy (CAPE), precipitation (PR), and dep convective heating rate (DCH) indicate strong convective activities, while negative values of the outgoing longwave radiation (OLR) and cloud top pressure (CTP) indicate strong convective activities. There are clear longitudinal differences in the sign and magnitude of each metric for both phases of the QBO. The convective activities are intensified over the Maritime Continent and weakened over the equatorial central and eastern Pacific during the QBOE, while the opposite occurs during the QBOW. 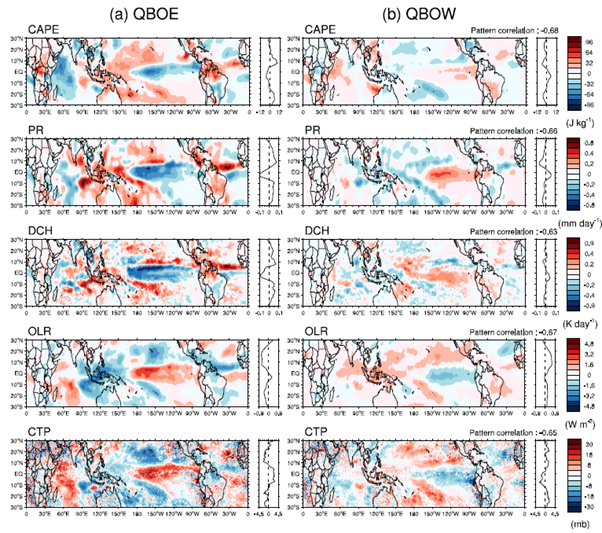 In chronically convective regions, however, the PR and OLR (derived from observational data) show stronger convective activities during the QBOE than during the QBOW at all latitudes. For the CAPE, DCH, and CTP, convective activity is strengthened near the equator and weakened in the subtropics during the QBOE (and vice versa in the QBOW). In particular, the changes in the CAPE with respect to the QBO phase precisely follow the meridional circulation concept of Plumb and Bell (1982) among the five metrics, because it includes the temperature and humidity near the tropopause, which is the most directly influenced by the QBO phase.