While PWs generated by the large-scale mountains and land-sea contrast are sufficiently resolved in the general circulation model (GCM), small-scale GWs forced by the small-scale mountains, convection, and jet/front system cannot be resolved properly in most of GCM, and thus, require parameterizations (Kim et al. 2003).

1) PWs embedded in the mean-flow can modify the propagation and dissipation of GWs (smith 2003).

2) GWs can influence on PWs primarily through two ways.

2-1) ​Momentum forcing of GWs modulates or generates PWs through altering the large-scale mean-flow.

Song et al. (2020) shows that the amplification of the PWs of zonal wavenumber 2 (ZWN-2) in the stratosphere before the onset of the 2009 sudden stratospheric warming is likely related to the enhanced downward-propagating PWs of ZWN-2 into the stratosphere from above. The enhanced PWs of ZWN-2 are found to be generated by the non-conservative forcing induced by GW drag (NCGWD) in the linearized quasi-geostrophic potential vorticity (QGPV) perturbation equation in the upper stratosphere and lower mesosphere. 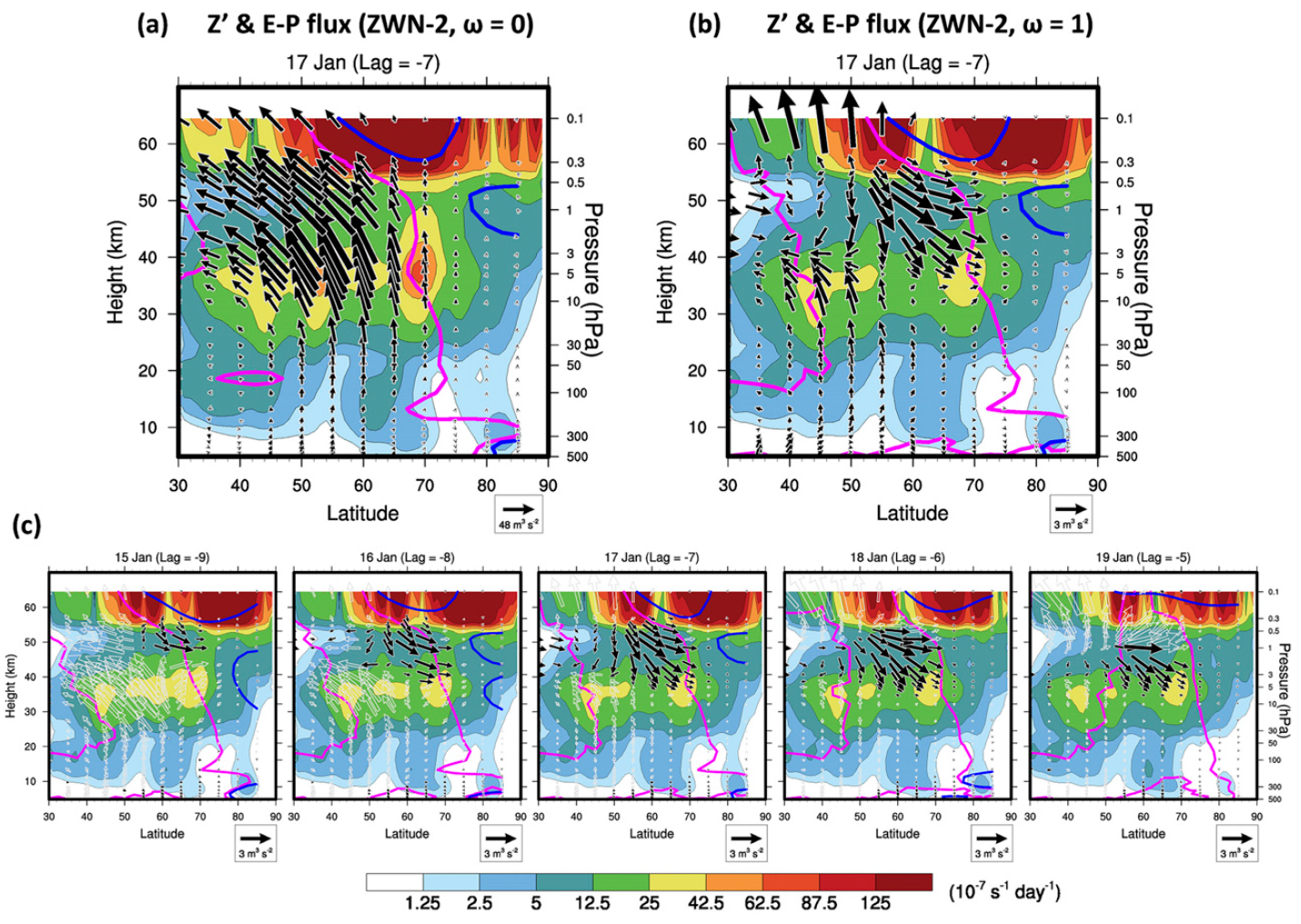 2) Perturbation of the QGPV (q’) is dominated by the NCGWD in the linearized QGPV perturbation equation and is in quadrature with the NCGWD.

This demonstrates that the introduction of a zonal asymmetry to GWD induces the direct in-situ generation of PWs having ZWN-2 (mechanism II) in the middle atmosphere as a non-conservative source for the QGPV perturbation, and thus geopotential height perturbation (H’) of PWs. 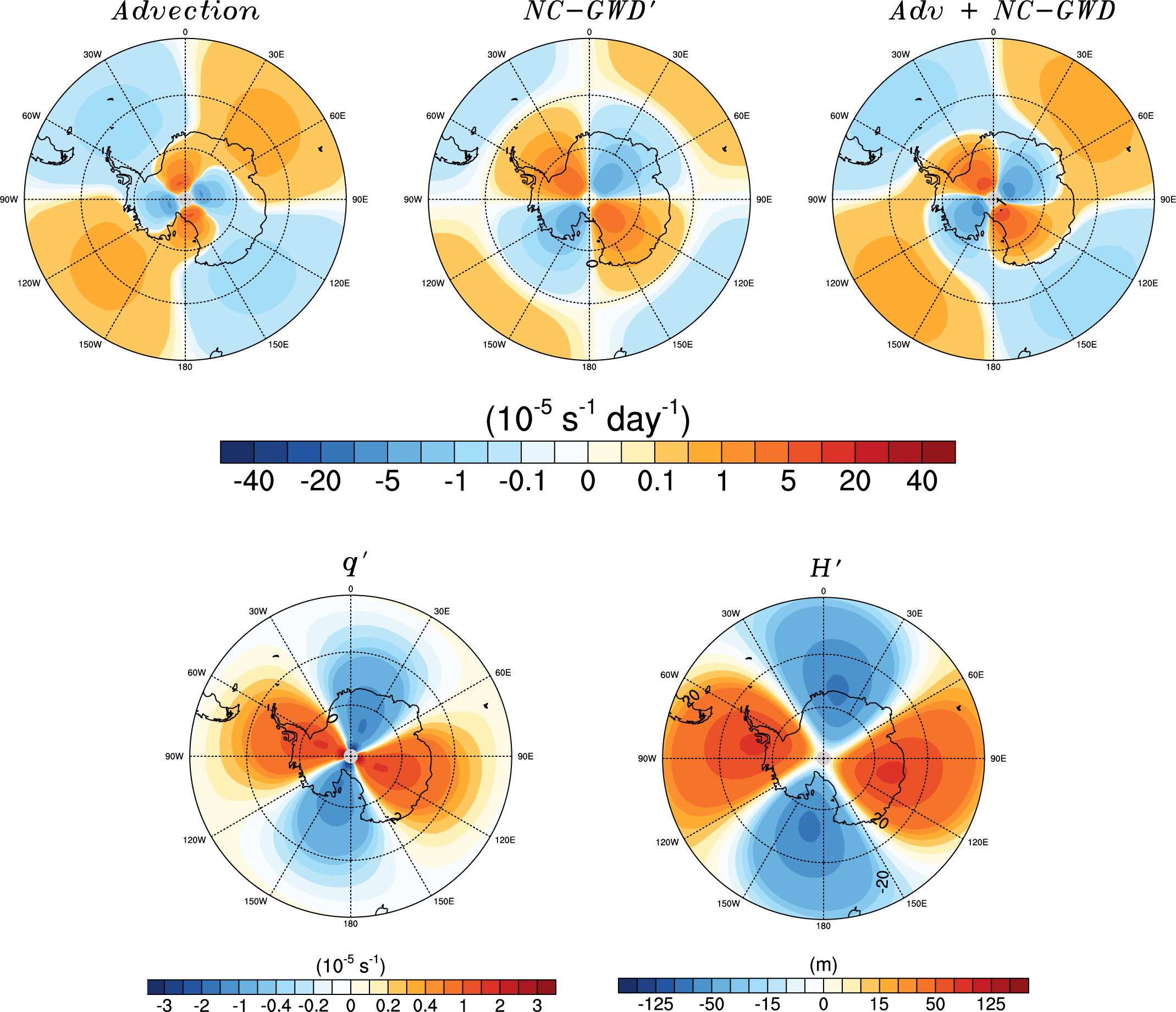 <Polar stereography of the advection, NCGWD, and the sum of minus advection and NCGWD (upper) and the perturbation QGPV and the geopotential height amplitude of PW 2 (lower).>

The most interesting phenomenon identified in the GW-PW interaction is compensation between PW and GW forcings: if one component of the system is changed, the others may act to compensate for the change (Figure 2). 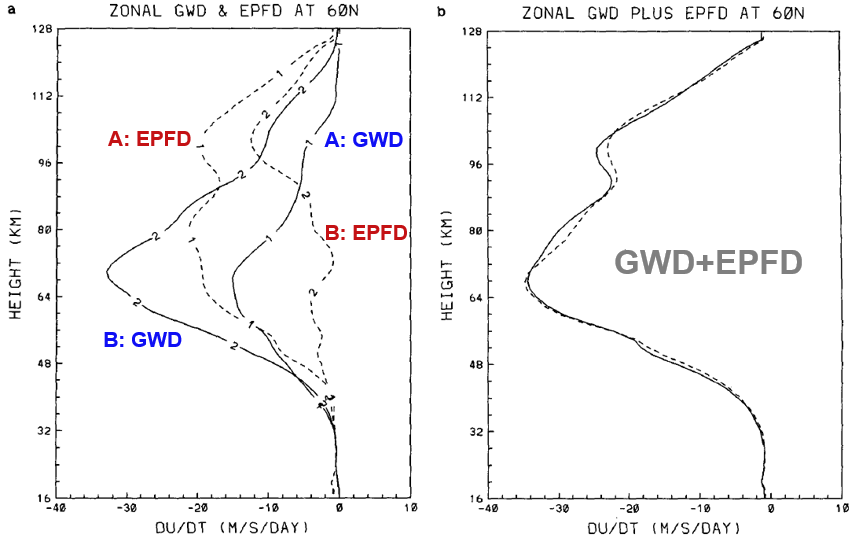