The role of gravity waves in the evolution of SSW

Stratospheric sudden warmings (SSWs) are one of the most dramatic events in the high-latitude stratosphere and are associated with the sudden breakdown of the polar vortex and a rapid increase in temperature. They were first observed using radiosonde by Scherhag (1952). SSWs usually occur in the northern hemisphere, greatly affecting circulation in the northern winter stratosphere (Holton, 1980).

Because large-scale planetary waves (PWs) have been considered to be important in the generation of SSW, the relationship between small-scale gravity waves (GWs) and SSW has not been thoroughly studied. In association with the development of GW observations using LIDAR or satellites, studies on GW variations during SSW have been performed recently.

We examine the contributions of each forcing term (including PW and GW forcing) in Transformed Eulerian mean (TEM) equations to the temperature changes during the evolution of SSWs. The differences in the contributions between two types of SSW, Type-1 and Type-2, are also examined in detail.

Additionally, we will analyze the effect of gravity waves from three perspectives. First, three-dimensional circulation and temperature changes induced by localized GW drag are calculated using the reanalysis data. Second, change of PW forcing induced by GW drag and their effects on the evolution of SSW are investigated through the potential vorticity inversion method. Finally, in numerical simulation study, the characteristics of SSW evolution under various GW drag conditions and background atmosphere conditions before the occurrence of SSW are examined through idealized simulations.

GWs in the upper mesosphere at King Sejong Station (KSS)

The gravity wave momentum flux (GWMF) in the stratosphere is estimated from temperature perturbations using satellite data and has a large value in high latitude regions during the winter (Jia et al. 2014). King Sejong Station (KSS) is in a hot spot of strong GW activity along the Antarctic Peninsula.

Understanding GW contributions to large-scale circulation in the polar regions, where climate change is proceeding faster than elsewhere, requires a deeper knowledge of the sources of GWs and their propagation processes.

We investigated the variability of GW activity in the upper mesosphere using wind variance observed using the meteor radar at KSS. Additionally, we analyzed whether the jet stream in the lower atmosphere could be a source of GWs in the mesosphere.

An airglow imager has been operated since 2008 at KSS to investigate gravity waves in the MLT from the airglow emissions with three different wavelengths of OH and OI. We investigate characteristics of GWs observed at KSS during 8 years (2008-2015) and examine possible sources of GWs using a 3-dimensional ray-tracing model (GROGRAT) (Eckermann and Marks 1997).

GWs in the troposphere and stratosphere at Jang Bogo Station (JBS)

The importance of the gravity waves in determining middle atmosphere circulation has been recognized by many observational studies. In particular, radiosonde observations provide direct measurements of wind and temperature covering over an extensive geographical and temporal range. We investigate high vertical resolution rawinsonde data collected at the Jang Bogo Station (JBS) from 2015 to 2016. Note that JBS (74˚374'S and 164˚137'E) is the second Korean Antarctic research station, constructed in 2014 in Terra Nova Bay, Antarctica. 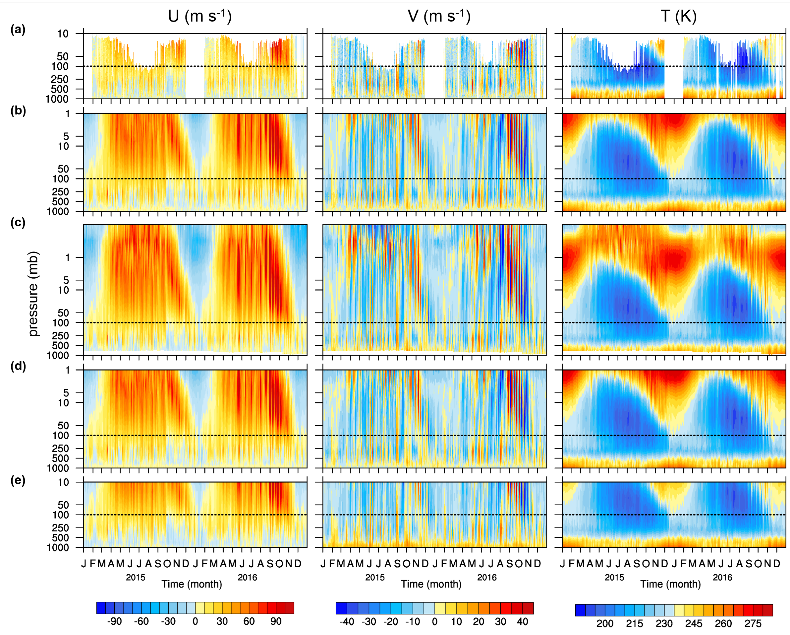 and temperature (third column) at JBS revealed in rawinsonde with four reanalysis data.> 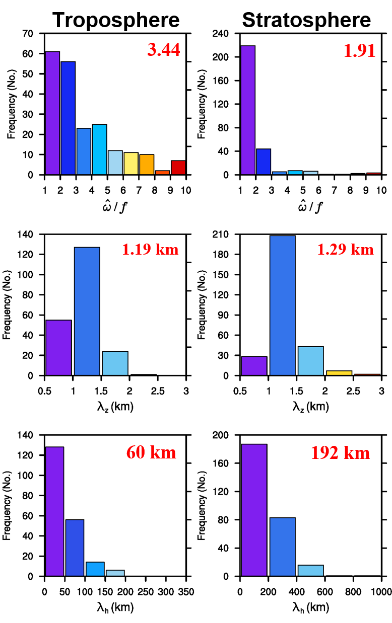 and λh (lower) in the troposphere (left) and the stratosphere (right).>

Using the rawinsonde observations, we examine:

(2) the characteristics of inertia-gravity waves (IGW) in the troposphere and the lower stratosphere using stokes parameter method based on quasi-monochromatic wave theory (Vincent et al. 1997).